Pizza Villa, one of Maine's iconic pizza spots, has been a neighborhood institution on the non-touristy part of Congress Street for nearly four decades, owned and operated by Regios brothers Phil, Tony and Andy for the majority of that time. There's the family-friendly dining room on one side, where you order the 10-inch pies at the counter. Connected by a doorway marked with a "No Minors" sign is the bar, which was added on in the '70s and still has that throwback feel.

Phil recently sat down with Eater to talk about the keys to Pizza Villa's longevity, changes he's seen during his nearly 40 years of running the place, the importance of a seasoned oven and lots more. Here's the interview with Phil Regios:

Your dad opened the place in 1965 and it's been you and your brothers running it for the past 30 years or so?
My father retired in 1975. It was me from '75 on. Then we bought the bar in '76. Before, it was just the dining area, then we punched a hole through the wall. My brothers came on a little while after that. I've worked here since I was a little kid. All of us did, really. But they were off doing other things when my father retired. I took it over and they came on shortly after.

I remember coming in here as a kid 20 years ago and I think it looked pretty much the same. Not much has changed over the years, has it?
That is correct. We did one major overhaul about 20 years ago. We've done some upgrades here and there, but it's pretty much remained the same.

And social media and that sort of thing isn't a real big priority for you, is it?
We're kind of old school like that. My daughter and my brother's daughter have started a Facebook page, which we never had before. I don't even own a cell phone. I'm one of those guys. I'm extremely low tech.

It's an interesting dynamic, with a family type of restaurant on this side and a dark, throwback bar through the doorway on the other side, but it seems like it works well.
It works sometimes [laughs]. Yeah, you could say it works. I've been in the pizza business and the alcohol business for what, 37 years? You generally don't see someone selling booze for that long. People don't generally stay in this business that long. I started when I was 20 years old, opened the bar when I was 21. Now I'm pushing 60. I've been doing this a long time.

Any secrets to keeping things together for so long?
I think you've got to treat people nice. I try to stress the service end of it. There's so much competition now for every food dollar, especially in this town. And there's a pizza place on every corner. You can't just compete with product and price. You have to compete with atmosphere and attitude, too. You've got to be the total package.

When it's firing good and I've got a nice crowd at the bar and everyone's happy, smiling, laughing and enjoying themselves, it's the best job in the world.

We've got a lot of TVs. We like football, baseball, hockey, basketball. There will be no Martha Stewart on my TVs. We try to keep it friendly and nice. I like to know people's names. We've got a lot of long-time employees. I can't seem to get rid of any of them. We've got that family thing. You've got to like who you're working with -- it's a small kitchen. 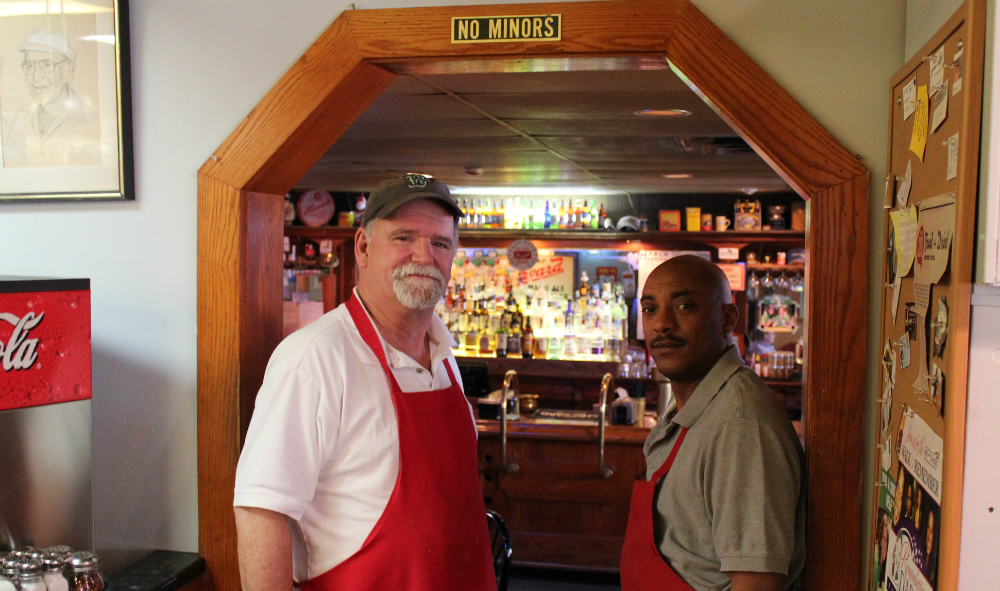 The Portland food scene has really taken off in recent years and the city has become a food destination. What do you think about that?
Well, it stinks for a person like me [laughs]. The entrepreneurial spirit only seems to exist here in opening up new restaurant, pubs, lounges, pizza places, etc., ad nauseum. There's a lot of competition now. We used to have a niche all to ourselves. I feel like we share that now with 10 or 15 other places in Portland.

Do you see a lot of food tourists?
I don't think they come to me. They're more downtown, more high-end. They might go to Otto. "Where's that place with the mashed potato pizza?" As trendy as I get is sundried tomatoes, which are a little passe these days. We try to keep it simple. I think sometimes places like us expand their menu too much. I try to do a few things but do them well. I do a lot of cooking in-house. We make our own meatballs. We cook our own roast beef. A lot of places buy things ready-done. We try not to do that. We make homemade soups. We make our own dough.

Do you still make the pizzas yourself?
Oh yeah.

Has the recipe changed at all over the years?
I try not to think that it has. It's my father's recipe. We've tweaked it a bit over the years, but we try to stay true to it. In my father's day, it was just pizza, but we've branched out to other things, soups, sandwiches, salads. Unless you do something really different, I don't know if a place can survive doing just pizza now.

Would you describe the pizza as Greek style?
That's what people like to call it. It's a pan pizza cooked in an old gas oven which has been highly seasoned because it's the same one since '65. The idea of replacing it is frightening, not because of cost but because of how it cooks. So we just keep repairing it and squeezing every bit out of it. A seasoned oven is a lot different than a new oven.

What are people ordering? Is pepperoni still the top draw?
Our specialty pies are popular. We have a garlic chicken, which is garlic, chicken breast, spinach and feta that goes on top of our sauce and cheese. That's our signature pie. People are looking for different items now. Twenty years ago, no one asked for pineapple. I still don't get that -- you want pineapple and anchovies? We're always trying to offer something a little different and kind of unique without losing sight of who we are and our roots.

Do you have any notable regulars?
You can't have a local, neighborhood bar, which is pretty much what we are, without having some flamboyant and interesting regulars. That's part of the package. Those are the fun people. They're the ones that make you smile when they walk in instead of making you frown. And there's been some borderline famous people that have come in over the years -- Paula Poundstone, Vince Neil, Dave Cowens. Governor LePage was in here once.

Do you eat pizza anywhere else?
Yeah, there's one in particular I like but I'm not going to name it. I don't go in. I send my wife in. But I do like to try other places because I'm curious.
· All Pizza Villa Coverage [~EMAINE~]
· All Pizza Week 2014 [~EMAINE~]
[Photos: Tom Minervino]