A new Woodfords Corner neighborhood restaurant from Arlin Smith, Mike Wiley and Andrew Taylor is in the works as long as Portland's zoning board approves their application. The three owners of Eventide Oyster Co. and Hugo's in the Old Port are looking to open a 26-seat restaurant, "tentatively named" Vannah St. Tavern, at 34 Vannah Ave., which has been vacant for some time. The Press Herald's Maine a la Carte blog was first to report the news. The full Conditional Use Appeal application can be viewed here. The spot was previously occupied by a an ethnic market; before that it was a bike shop for many years.

According to the application, the new restaurant will be more casual and affordable than Hugo's and Eventide, with "the concise menu scrawled daily on a chalkboard." It will "take[e] its cues" from restaurants like Joe Beef (Montreal), Le Pigeon (other Portland) and Husk (Charleston). "While a hearty red wine braised beef with short rib might feel out of place at Hugo's or Eventide, it would be right at home at 34 Vannah St. — as would a whole roasted monkfish tail, a perfectly grilled porterhouse steak, or a plate of fried smelts."

The restaurant would serve dinner only and be open on Wednesday through Sunday nights, from 4:30 p.m. to 11 p.m. There will be a full bar, but it will not be a "tavern" in the drink-yourself-silly sense of the word. "Very simply, it will not be a bar, loud music will not be welcome and any disorderly conduct will not be tolerated." On what to expect for drinks: "Focused on classic cocktails, a well balanced draft line and a unique list of high-value wines, the beverage program will be ideal for those saddling up to the ten-seat curved bar for a drink and a conversation with the bartender or sharing an intimate table and a bottle of wine with a loved one. With antique furniture, tables of reclaimed wood and walls lined with wainscoting and wallpaper, the space will feel warm and well-worn — like your grandmother's house."

A sketch for the layout shows a 582 square foot dining area, with about 1150 square feet devoted to the kitchen and storage/refrigeration. Check it out: 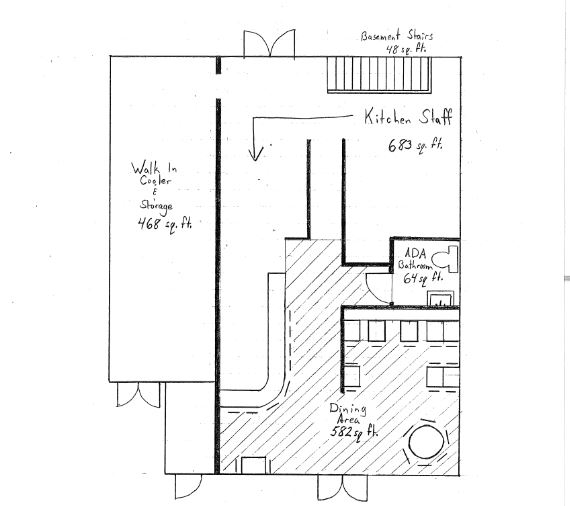