Share All sharing options for: Damian Sansonetti's Picks for Pho, Brunch and More

Vacationland is home to a lot of restaurants, and among them are hidden gems some Mainers just aren't unearthing. To help guide us to these potential discoveries, we've enlisted some of our local chefs to share with us their off the beaten path recommendations for Dining Confidential, a new, semi-regular feature on Eater Maine. 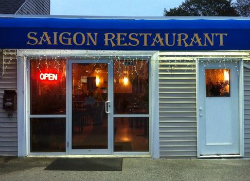 Damian Sansonetti, who opened the Blue Rooster Food Co. last winter and plans to open Piccolo in the former Bresca space in the next couple months, hasn't been in Maine for a full year yet, but he's already found a few under-the-radar spots to grab a bite on the commute between the Old Port and his North Deering home.

The former executive chef of Bar Boulud in New York City admits he and wife Ilma Lopez (previously the pastry chef at Grace before going on maternity leave last month when the couple's daughter was born; she'll be making pastries at Piccolo when it opens) don't have much time for going out these days, but he's got a few favorite bars and brunch spots in town, too.

"I love to eat quirky Asian food," Sansonetti said. "In New York, I loved eating Korean food. Here, it's turned more to Vietnamese, between Thahn Thahn and Saigon. They're right across the street from each other on Forest Avenue. Each does something a little different. Then you get into the pho debate. People argue which one is better. I'm like, they're both good, man. Especially on a cold Maine night, that stuff is great. At Thanh Thanh they make some kind of Vietnamese casserole. Oh, that shit's spicy, but it's so good. It's off the menu. I have to ask them for it.

"Susan's (Fish-n-Chips) is good. Samuel's (Bar and Grill) has great wings. It's a great little spot. Those are the four little places closer to our neighborhood. We're over by Riverside, so they're on our way into the city. As far as going out, since we've opened up the Rooster, we haven't really had much time to do anything. I love Novare (Res) a lot. For a nice little dive bar, Sangillo's is great. I think a lot of other people in the restaurant industry feel the same way. My favorite breakfast and brunch spot is Bintliff's. I love it. Their corned beef hash — there's like a pound of meat there. I don't know how they make money. It's really good. Hot Suppa is good, too."
· All Coverage of Damian Sansonetti [~EMAINE~]
· All Editions of Dining Confidential [~EMAINE~]
Saigon. [Photo: Yelp]