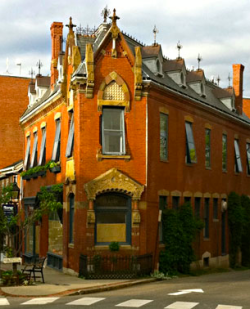 Whatever it was that pushed Erin French to "go deep" and take a leave of absence from her Belfast restaurant, The Lost Kitchen, the chef is not — as she wrote in a May 1 blog post — "returning home and to The Lost Kitchen, happier, healthier, found." But in a surprising twist, an even bigger name than French is opening The Gothic in its place, according to Emily Burnham of the Bangor Daily News.

Chef Matthew Kenney, a Searsport native and part-time Belfast resident who is internationally renowned for his take on raw and vegan food, will be the one opening The Gothic – named for the old coffee shop that was located at 108 Main St. until the mid-2000s. Kenney, who owns two restaurants in Santa Monica, Calif. and Miami, and who has written ten cookbooks, will offer a mix of raw foods, vegan and non-vegan dishes, and artisanal cocktails at his new eatery.

It will be interesting to see if Kenney's clout will help win him success in Belfast, whose art and dining scenes are wildly dissimilar from those of Santa Monica and Miami. But the chef knows Maine; he has kept an apartment in Belfast for several years and operated the Commissary at the Portland Public Market "which eventually closed as a result of financial woes at Kenney's New York restaurants following 9/11," according to The Portland Press Herald.

Before he became a raw/vegan food guru, Kenney was a hotshot in New York City, where he was named one of Food & Wine's Best New Chefs more than two decades ago. He has been nominated twice for a James Beard Award and spoke at the TEDx Talks in 2011. In addition to his two restaurants, M.A.K.E. in Santa Monica and The White Lotus in Miami (under development in an artsy-hip entertaining venue called The Space), Kenney operates raw food culinary schools in both places.

The Gothic will open June 7, according to its Facebook page; the restaurant's phone number, 207-338-GOTH, will be active for reservations tomorrow.