Ever So Quietly, Outliers Makes Its Debut

Share All sharing options for: Ever So Quietly, Outliers Makes Its Debut

One of the most hotly anticipated restaurant openings in Portland happened last night, pretty much on the down low. There were hints on Outliers Eatery's Twitter feed, as owner Peter Verrill, Jr. posted random videos under the hashtag #AreYouReady and teased out his 12-tap lineup one-by-one. According to Outliers' Facebook page, the restaurant will be open tonight and Saturday, then reopen on Wednesday for the regular schedule of Wednesday through Monday 4-11. Verrill said the menu will change daily; last night's included a crispy pigs ears appetizer and braised lamb pappardelle on the meat-heavy list of entrees. Outliers' chef is John Dexter, who most recently worked at Linekin Bay Resort in East Boothbay. He is also a veteran of Street & Co. and Hugo's in Portland and previously worked for Verrill at Foreside Tavern in Falmouth. 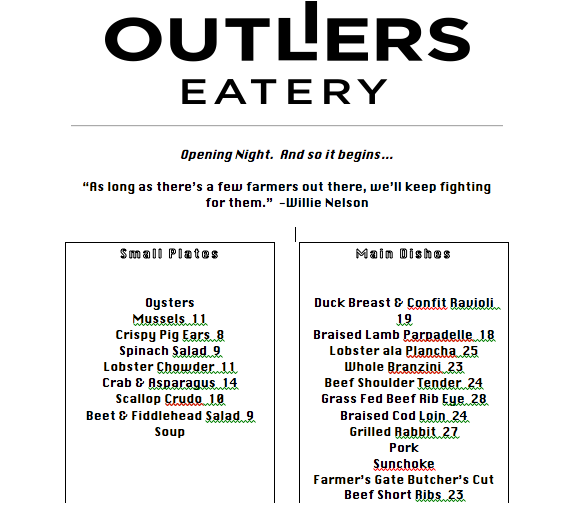