Share All sharing options for: Outliers Gets License Despite Police Chief's Objections

At tonight's Portland City Council meeting, the Porthole's application for a liquor license sailed through without a hitch, while for Outlier's Eatery owner Peter Verrill, it was definitely a nail-biter. In the letter filed with his application, Verrill stressed that he wants "to serve as a gracious neighbor," with no entertainment and never open beyond 11 p.m. But in a memorandum to the mayor and council, Portland Police Chief Michael Sauschuck recommended that the license be denied, "based on the criminal and motor vehicle history of the applicant, Peter Verrill." According to Carol McCracken of the Bangor Daily News' Munjoy Hill News blog:

A turning point in his favor came about when half way through the questioning, Councilor Cheryl Leeman asked Verrill why should 'we take a risk on you?' He responded: 'I've put everything I have into this. Vision is where I excel. I'm not looking to be a millionaire. I want to create something wonderful for that neighborhood.' Verrill assured the council that he will be the restaurant's accountant and have no supervisory role over the wait staff or bartenders.

The application ultimately passed by a vote of 7-2. 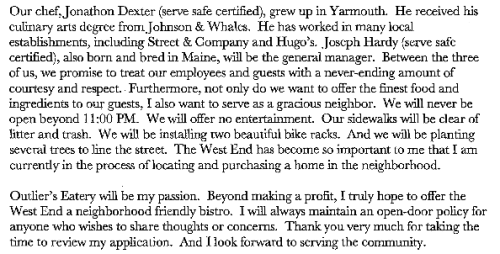