Share All sharing options for: Porthole Is Rat Proof, Expected To Reopen April 1

Thanks to $100,000 worth of renovations, "the rats have gone elsewhere," says Porthole owner Ken McGowan, giving The Portland Press Herald's Meredith Goad a tour of the changes at the restaurant on Custom House Wharf.

If someone comes in and says 'What about the rats?' we're going to tell them what we did to take care of that issue. Come out to our kitchen. We'll welcome you into our kitchen and you can see what we're doing in there. We're going to have a nice kitchen, and it's going to be open.

Other changes include a spruce up of the deck, three new booths in the dining room and "light bluish-gray" paint on the walls. Macgowan is saving the 60-year-old copper-top bar, but adding a drinks rail. The old Comedy Connection next door "will become a pub serving food out of the Porthole kitchen, is expected to be open by May 1, and it will be open year-round from 11 a.m. to closing, ... which "doesn't mean late night." 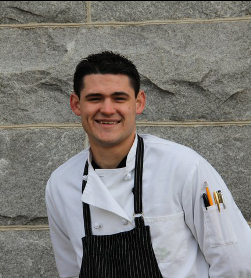 As for the food, the iconic breakfast and brunch dishes fans know will stay, said Porthole's new chef, Jesse Poirier (right). A Portland native who started his kitchen career at the age of 14, Poirier worked at Miyake, Cinque Terre, Vignola and The Front Room before moving to Orlando, Florida in 2007, according to Porthole general manager Beth Poitras. He returned to Maine in 2010 to reopen Diamond's Edge restaurant on Great Diamond Island and Falmouth Sea Grill in Falmouth.

· A Peek Through The New Porthole [PPH]
· The Porthole Restaurant [Facebook]