On Friday, Part 1 of Eater Maine's interview with Stephen Lanzalotta delved into the concept of the upcoming Slab restaurant, how Lanzalotta's famous Slab pizza came to be and the common culinary ground he and Nosh owner Jason Loring share. Lanzalotta and Loring are two of the five partners in Slab. They are joined by Emily Kingsbury, who will head the bar and the front end, and also Tobey Moulton and Matt Moran (who are partners in Nosh, as well). In Part 2, Lanzalotta talks about the evolution of a modest concept into a far more ambitious one, how the five chose the space they did, why amends with Micucci's will likely never be made, and lots more. Here it is:

How did you decide on this spot for Slab?
We went through about four months of looking at places. I don't even know how many places we went through — a dozen, 15 different spots. All we knew was that we wanted to stay in Portland. I like the community. My family is here. Also, I didn't want to have to reinvent myself. I didn't want to go to an outlying community and fit their needs. I'm already known for the Slab here. We wanted to roll with that.

But the original idea was a little, tiny shop, almost like the original Otto, where you have a shop 12 feet wide and 30 feet deep, two beers on tap, the Slab and maybe something else. Maybe three menu items. We were all looking for that, thinking we'll just start small and simple. If it takes off, we can morph into something else. What happened, as time went on, is the store fronts physically just weren't available for what we were looking for. With each space that actually appealed to us, they were getting bigger and grander in size. It was out of our hands.

When we all stepped into this place, all five co-owners, we all said the exact same thing: "Wow. Yeah." Then it was just a matter of securing the lease, because we really felt this would be the spot to realize our dream, just on a grander scale. More craft beers (there will be more than 20 on draft). An actual bar, not just a standup area to grab a bite and get out the door. There's plenty of sit-down here. Then of course the menu had to expand. Pizza and beer just isn't enough. We want to attract people to come here several times a week, but you can't have pizza and beer — unless you are a college student — that often in your diet. So the menu had to diversify a little bit.

We're going to have a beautiful cocktail list with Sicilian-influenced cocktails. That's going to bring some sophistication to the place. We'll have dessert wines. Then there's going to be a daily special board with meats and fried foods. There will be the core menu of the pizzas and a couple sandwiches and desserts, then seasonal specials. So we can bring in a real Sicilian-style lasagna. Or arancini or fried zucchini.

So you credit Meredith Goad's Press Herald article on your firing with creating this opportunity for you?
I do. There's no other way to look at it. Jason saw that and wrote to Meredith directly, I think that day. We connected. He was one of a list of offers I had. I had to determine how far I wanted to go. Some people wanted me for a GM for their restaurant. There was a restaurant that was having an identity crisis and they wanted me to put a stamp on it and make it recognizable. I'm good at consistency and branding. I had offers to start whole new restaurants. It varied, everything from being a participant as a baker, a chef, a guest chef, a consultant, a GM, a full owner. At this point in my life, I didn't want uber responsibility. I wanted shared responsibility, someone that saw my vision and was willing to stand there with me while I do the creative, culinary part and they do the funding and paperwork. I didn't want to have to cover all the bases.

This situation felt perfect. There are five owners, each with their own specialty. We play off each other very well. In the four or five months we've know each other, we've been able to build on each other's ideas and compromise. It's been like a beautiful layer cake. We don't have sparks and conflict. It was an organic process of us walking around town with real estate agents and the concept naturally upscaled itself, culminating in this place.

It's so close to Congress Street. A guy with a good arm could hit it with a rock. There's this 60 or 70 foot wide exposure looking toward it. Walking down Congress Street, it looks like a clam shell — like my Luna bread, which is a half-moon, when you cut it and open it up for a sandwich. It's opening up toward Congress. That pearl and oyster is shining toward Congress. As long as we light it properly, it's going to catch your eye as you are walking down Congress. You're going to be able to see it. If it was on the opposite side of the Portland Public Market, we wouldn't have thought about it at all. Cumberland Avenue is too dark. But here we have a southwestern exposure, which means you're going to have the sun tracking at Happy Hour.

The floor plan will bring in that street aspect. If we decorate this properly, it will have a real Sicilian street feel. The food will be very sophisticated in flavors, but the presentation will be really rustic — on paper and to go — to bring in the casual aspect. We'll have the same feel with the decoration in here. Casual enough so that you can come in dressed as a workman and not feel out of place, or you can bring your date in five-inch spiked heels, dressed nice, and have a seat at the beautiful, classy bar. We hope to capture all ends of the market.

Where will the beer garden be?
It will be right out in that natural little enclave of birch trees that already curl back on us, forming a semicircle umbrella. (From the exterior, just to the right of the main entrance. See the photo below.) There will be a beautiful interplay of indoors and outdoors. There will be the conviviality of eating on the street, rather than the seated dining experience. We're trying to get away from the haute cuisine, fork-and-knife kind of thing. We want it to be as lively and fun as possible, with the food as interesting as possible. 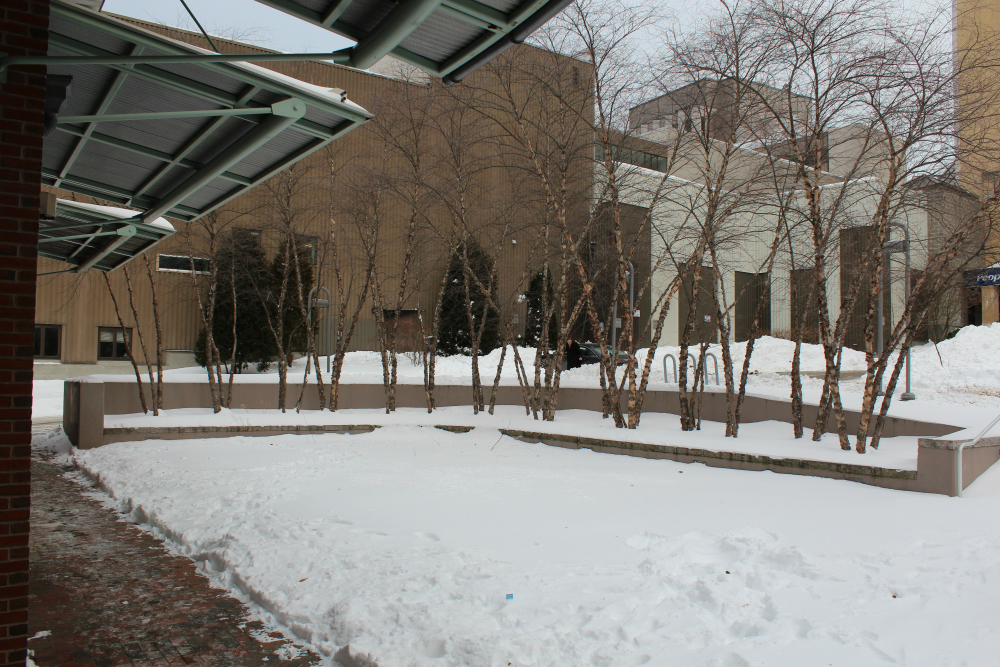 Your firing from Micucci's over the summer was public and contentious. Have you made amends?
Honestly, I don't think amends will ever be made. Even though I'm not Sicilian, I have that in me. It's Italian. I was wronged. I invented the Sicilian Slab, and that was well documented. My Luna bread traces back to 1993. All I asked when I was fired was that they take the names off: No more use of Luna bread and no more use of Sicilian Slab. I said I can't stop your people from making the product, because I educated people on how to make the dough.

I received some legal consultation and the greatest wisdom prevailed. I consulted six attorneys to make sure I had a wide variety of opinions from a large geographic area, and they all said the same thing: Your smartest bet is to cut your losses, move on and make the next place you're at better than where you were. I decided to take that advice and not pursue things legally. It seems to have resolved itself now. I've moved on. Micucci's put up a new website — which is great looking by the way — and they changed the names. They're calling it "Sicilian pizza" and "Calabrese bread." I don't know if they've changed it at the point of sale.

It's such an old issue that we're just moving ahead and calling this place Slab. That wasn't even my idea. That was Jason. He's like, "What do you think of Slab, dude?" And I said, "Why not?" It gives it that casual, grounded feel. It's like, Take it or leave it, guys. We're going to put a piece of gorgeous pizza on butcher paper. If that's not your eating style, no problem because there's a line of people waiting here for one. We want to keep that fresh, sassy kind of feel to the whole place.

What's the time frame for opening?
I'm thinking April. To get the permits passed in Portland is tough, We're still waiting on clearance. We're just hanging right now, waiting for the official stuff to get passed. We're behind schedule that way from our original plan. We thought we'd be three of four weeks into the project by now. Basically, we're a month behind schedule. Hopefully we can get it all done in three months and open in April, but it might be closer to May. The beautiful thing is there's zero to be done to this place structurally. That will help us in the permitting and construction.
· Talking Slab with Stephen Lanzalotta, Part 1 [~EMAINE~]
· Portland Pizza Maestro's Firing Panics Fans [PPH]
· All Coverage of Stephen Lanzalotta [~EMAINE~]