Share All sharing options for: A Fernet Primer from Bartender Andrew Volk

Never heard of Fernet? You're not alone. Up until a few years ago, it wasn't available in Maine. While it's been popular in San Fransisco and among bar and restaurant workers (not to mention old Italian men) for years, even its biggest fans will admit it's an acquired taste. But its popularity is increasing across the country, especially at craft cocktail bars. Eater Maine asked bartender Andrew Volk, who owns the hot new Portland Hunt & Alpine Club with his wife Briana, to help us out and answer some questions about the bitter herbal liquor.

For the uninitiated, how would you describe Fernet?
Everyone that enjoys it has their own description. I usually use Colgate and rubber tires. But in a good way. Some people take to it right away, but it's described as an Italian bitters or digestif — something you drink after a meal. It's got all sorts of herbs going on and it doesn't have a lot of sugar. It's predominantly saffron, which gives it the dark yellow color. For a lot of people, it takes some warming up to. I remember the first time I had it, I didn't quite get it. Then I tried it again because my curiosity was piqued, and it grows on you.

Is there a gateway cocktail you'd recommend to ease someone into Fernet?
Yeah, there are a couple. We have on our menu a Saffron Sour. The base is Fernet. There's an ounce and a half of Fernet in it, with lime juice and egg whites and a saffron syrup that we get from Royal Rose in Biddeford. That's a great introduction to Fernet because it has the bitterness but it's not as intense. Branca also makes a product called Branca Menta, which is similar to Fernet, but a little sweeter and more minty. We use that in a drink called the Fratelli Stinger. Those are both good introductions to the bitters without doing a straight shot. You've got to graduate to that.

And it's been popular in San Fransisco for awhile?
It's been popular there for a long time, particularly among bartenders and industry people. It's grown out of that and is popular across the country now among a certain set of people. I've heard it referred to as a "bartender's handshake." If you're a bartender and someone orders a shot of Fernet, you can often pick them out as someone in the service industry. Certainly I've been picked out by bartenders that I did not know at the time by ordering a shot of Fernet. They'll be like, "Where do you work?"

What's responsible for its growing popularity?
Well, it's delicious. Certainly the interest that's grown in cocktails in the last 15 or 20 years fuels that. Everybody is looking for what is exciting and new and different. Fernet fills a category, where there's not a lot else out there that fits the category of sort of digestif, potable bitters. A lot of them tend to be sweeter or more one-note. Fernet is pretty complex. It's its own animal.

It has a bit of a reputation as an Italian old man's drink. Is that fair?
That's how it became popular in Italy. In the afternoon, you'd go to the cafe and get your shot of espresso — your doppio — and you'd get a shot of Fernet. It is an old man thing. It's got a lot going on and it's not for the faint of palate. It's pretty intense. 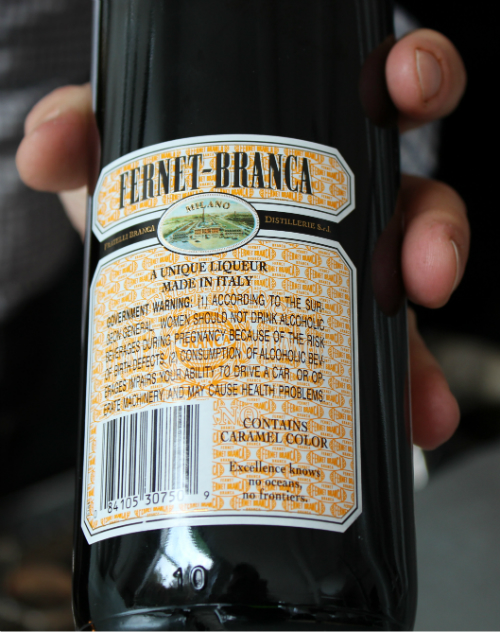 Have you had any luck turning some locals on to it?
Sure. One of the exciting things as a bartender for me is to open the guests' eyes to something new, whether that is a different type of gin, or a different cocktail or a totally different spirit. Fernet is one of those fun things we have in our back pocket. If someone says, "I really like X,Y and Z. I'd like to try something different that I've never had." We'll often pull that out and say, "Try this." There's a cool little slogan on the back: "Excellence knows no oceans, no frontiers." It's kind of fun.

Is it particularly well suited for Maine?
It could certainly be seen as a cold-weather beverage, yeah. If you're drinking it on the rocks or by itself, it is warming in a sense. It's relaxing. As a digestif, that's how it fit fits. I often talk about moods while drinking. People ask me what I like to drink and it's all about the mood. Beyond my professional obligations, I really do like a lot of that stuff up there (points to bar shelf). Fernet is relaxing. After a big meal, you have a couple sips of it, sit back, relax and digest.
· All Coverage of Portland Hunt & Alpine Club [~EMAINE~]
· All Coverage of Cocktail Week 2013 [~EMAINE~]
Andrew Volk displays a bottle of Fernet Branca. [Photos: Tom Minervino]