Natalie Ladd Has The Inside Story on FOH

Share All sharing options for: Natalie Ladd Has The Inside Story on FOH

Welcome to Front & Center, a series highlighting front of the house professionals in Maine restaurants. To wrap up the week, Natalie Ladd, food and restaurant writer for The Portland Daily Sun, writes about a few of her favorite FOH people, with a spotlight on Josie Carter of Samuel's Bar and Grill and Jasper Rice of Congress Bar & Grill - both in Portland. 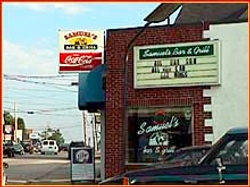 Front of the House hospitality people are MY people. I don't just observe, judge, evaluate and write about them in my weekly column, What It's Like. No, I live, work and play along side them, and picking just a few memorable characters and Superstars to exalt and applaud is difficult. In this town, they are the exceptional norm and a key main ingredient, rather than a garnish to be brushed aside.

For example, how can I leave out the skills and charm of Melissa Lefler, FOH manager at Casa Novello in Westbrook, who was once a new hire of mine over a decade ago? After an initial interview, I picked up the phone in staffing crisis mode and said, "So, when can you start?" to which she replied, "Um, anytime, I guess." Two hours later, she was in uniform, working a challenging section during a full tilt lunch where she kicked butt and took names. Over the years, we have worked together on and off, in various capacities, and she never ceases to amaze me. How can I fail to mention Ryann Clark Chamberlain, a full-time server and accomplished caterer who is in remission and sporting a retro Sinead O'Connor hairdo after beating (fingers crossed) a rare form of breast cancer? Chamberlain is leading our team in next week's Susan G. Komen Race for a Cure. The name of our team? Breast Intentions.

The roster goes on and on, but for the sake of the request, I've narrowed it down to two:

Jasper Rice of Congress Bar & Grill, at 617 Congress Street, has been in the game since the tender age of 13. His mother was a career server, having punched the clock at Portland classics such as Rosie's, Ruskie's, Pizza Villa, and Great Lost Bear, to name a few. His dad was a musician who was in and out of the bars as well, and as Rice says, "I was doomed. I went to college for like ten years, and once worked for the city laying sidewalks, but realized I hated getting up at 6 a.m." Also a coworker once upon a time, Rice holds the distinct honor of being the cleanest, tidiest, neatest person to ever successfully fend off a fruit fly. His smile is as genuine at closing time as it is at 7 p.m. and he's even tempered, remembers everyone's drink, and is in my Cosmo Hall of Fame. Boyishly charming at 36, Rice is loved by all, and, as a key player in the location formerly known as Norm's, is peaking as one of the all-around best in the business.

Located off the peninsula on Forest Avenue in Morrill's Corner is Samuel's Bar & Grill, home of full-time server and bartender Josie Carter. To newbies at the delicious 2-4-1 pizza and to-die-for wing haven, Carter is blunt to the point of rudeness, but has a heart of gold and works the room with speed, agility, accuracy and humor.

It never fails to amuse me when I walk in with my friend and she says to me (more as a statement than a question), "Hi, Honey ... Miller Lite, no bottle?" and then turns to my favorite male companion with, "What about you, Asshole? Export on draft?" She makes Seinfeld's Soup Nazi look like a Boy Scout.

Owner Sam Mirnivino praises Carter's work ethic and acknowledges her style isn't for everyone. "Josie and I clown around a lot. Sometimes, she goes too far, and I say, 'You're fired!' to which she replies, 'No, you're fired! I forget for a second that I'm the owner. But the staff respects her. When she says something, they listen. Truth is, even I wouldn't want to really piss her off. But she's a great server and worker and people who know her really love her."

Behind the tough exterior, Carter's 10 years at Samuel's has paid off, and regulars wait in line for the privilege of being simultaneously abused and loved by her. She's a good fit for the bar which puts out surprisingly good food, has excellent marketing, and offers a seasonal "patio" in the parking lot consisting of picnic tables overlooking Forest Ave. It's the home of the .05 mimosa during weekend brunch, and 2-4-1 pizzas a couple of nights a week. Carter always remembers intricate pizza combinations and sincerely means it when she waves good by saying, "Hey, see ya soon ya fuckin' loser."

Honorable Mention goes out to the bartenders at the Armory in the Portland Regency who dress like flight attendants and make the most beautiful citrus garnish. Discreet (it IS a hotel bar after all) and classy, the glasses are oversized and the drinks are always chilled to perfection and served with warm professionalism.