A Tribute To Barman/Surfer/Philosopher Ken Courtney

Share All sharing options for: A Tribute To Barman/Surfer/Philosopher Ken Courtney

Welcome to Front & Center, a series highlighting front of the house professionals in Maine restaurants. Right now, Anestes Fotiades, editor and founder of Portland Food Map, source of everything and anything about food and restaurants in Portland, writes about Ken Courtney, a former bartender, server and host at Bar Lola on Munjoy Hill. 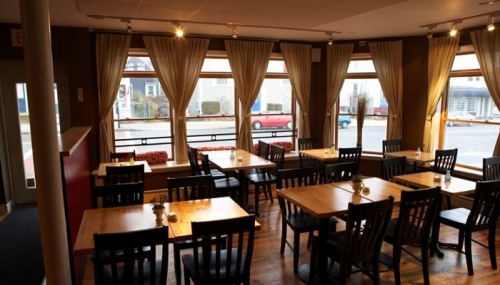 Bar Lola's owners, Guy and Stella Hernandez, seem to have a knack for finding great staff. But even by their standards, bartender, server and occasional host, Ken Courtney, was a real standout.

You knew when you walked through the door and spotted Ken behind the bar that it was going to be an especially good night. Like all good bartenders he had a skill for turning a list of ingredients into something that greater than the sum of its parts, tuned to just what I needed on any particular evening.

As adept as he was behind the bar, what really set Ken apart was a pitch perfect ability to read each situation and adapt to keep even the most diverse set of diners perfectly satisfied. Friendly and engaging by nature, he always had an anecdote or some unexpected observation that built a bridge with whomever he was speaking. Whether I was at Bar Lola with a gang of friends or a group of colleagues from the office everyone walked away equally charmed by the experience.

In his essay for Portland Food Heads about surfing during a hurricane, Ken shared his own perspective about working in the hospitality industry:

Typically, when serving people dinner I think of them both as benefactors and as recipients of a great gift; namely, the food which they are being served and which I have the privilege to bring to them.

I have to say the feeling was mutual, I always thoroughly enjoyed the meal and considered it a pleasure and a privilege to be served by Bar Lola's very own polymath/surfer/philosopher.

In the fall of 2009 Ken moved to New York City where he's currently earning a doctorate in philosophy. Those of us in the Portland branch of the KFC (Ken Fan Club) trade news from NYC and sightings from his occasional visits back to Portland. Hopefully his new colleagues and students appreciate him as much we still do.