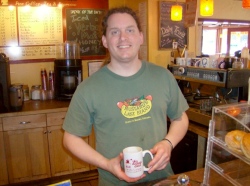 When asked for my favorite front of the house restaurant folks, my immediate response is Carson Lynch, proprietor of The Gorham Grind, the fiercely independent coffee house within easy walking distance of my front door. Carson regularly pours caffeine into my cup, and he compassionately ignores the many days when the lines blur between my inside and outside pants. I wrote much of my first book on his couch, and his little touches of daily trivia and horoscope predications make even the worst mornings feel bearable. The Grind is the finest kind of local joint, led by the finest kind of local guy.

And then there's Anessa and Troy—the server and bartender at Gritty's in the Old Port—both who tolerate my musician husband's performance antics every Tuesday night. On Wednesday mornings, when I sift through the kitchen table pile of my husband's pocket detritus—guitar picks, business cards, small change, and little metal tool things—I often see a handwritten note used to hold his performance space. "Please do not sit here," the note usually reads, "It is reserved for a guitar god." I am not sure who writes these placeholder notes, but they make me extremely happy to find.

But, my hands-down, overall, best in show prize for front of the house goes to the Kelley sisters, Colleen and Michelle, of Silly's and Silly's with a Twist. I return to the words I wrote for the Maine Sunday Telegram in January:
"When a man sits with a pretty girl for an hour, it seems like a minute," Albert Einstein famously explained. "But let him sit on a hot stove for a minute, and it's longer than any hour." His point? "That's relativity."

In the relative world of dining, that's also Silly's. It is relative because while the James Beard Foundation may never laud Colleen Kelley's culinary efforts, it's okay. We will. Silly's consistently wins local recognition—for service, sandwiches, and desserts. Cajun, pizza, vegan cooking, and most recently, "Taste of Portland."

If there was an integrity prize, I suspect Silly's would win that, too. Colleen and sister Michelle do not just talk the local talk, they walk it—in silly style. Those bumper stickers? Local printer Dale Rand. Ice cream? Made in Skowhegan. Banking and payroll, coffee and bread sourcing—every possible aspect of Silly's is locally led. Even the used frying oil powers the area's bio-diesel cars.

From its roots as a walk-up counter wrap joint to its current incarnation as maybe the most unique casual dining experience in greater Portland, now with an expansion into the building next door, the Kelleys have created something to be proud of. And it goes the other way, too—we are proud of them.

In warmer weather, outside tables are flanked by rainbow fencing and positioned beneath a canopy of twinkle lights while flowers grow from a claw-foot bathtub. Inside, year-round, Silly's is all about kitsch. Feathers, beads, and Elvis memorabilia decorate the walls. Devotees send photos from all corners of the world, and I once watched Colleen quietly box up an elaborate care package to a local soldier serving overseas, just because it was the right thing to do.

It is this Kelley family reputation for consistency and integrity that puts both of them at the top of my favorites list. They are good people doing good things—for their employees, for their customers, and for their community. Maine's dining community is lucky to have Colleen and Michelle Kelley. They win—at pretty much everything in life.