As far as we know, the world didn't end today, as some doomsday-sayers had predicted. Plus, it's Friday and four days until Christmas - what better way to celebrate the weekend, the holidays and yes, being alive, than by throwing eating and drinking moderation to the wind?

Thankfully for her readers, The Portland Press Herald's Emma Bouthillette is "the kind of bar hopper that doesn't always drink the same thing ... always up for trying something new." So she's thrilled to find an "extensive drink menu" at Local 188, although she hesitates at the suggestion of a "Bergeron Sidecar ... house-infused fig and vanilla bean bourbon, Cointreau and fresh lemon juice," choosing instead the "Ruby Honey Jam ... grapefruit rosemary-infused gin with fresh lime juice, St. Germaine and honey simple syrup." We'll take one of each, please. 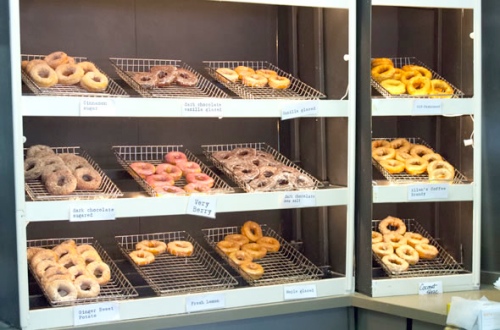 Doughnuts were invented in Camden in the 1840s, according to the Bangor Daily News' Emily Burnham, which may explain why there are so many good ones here. Just in case you don't have enough cookies or other Christmas goodies in the house, Burnham has a video tour of four Portland-area doughnut destinations. The ones at Cookie Jar Bakery in Cape Elizabeth "are huge, so you'd better pack an appetite if you want one for yourself." Frosty's in South Portland boasts the doughnut version of a fixin's bar. Tony's Donuts "seem to have been specially engineered to be perfect to dunk in coffee." And the new kid on Park Street, Holy Donuts, makes "wild flavors," including bacon cheddar - "not a traditional doughnut by any stretch, but it is an uncommonly delicious treat."